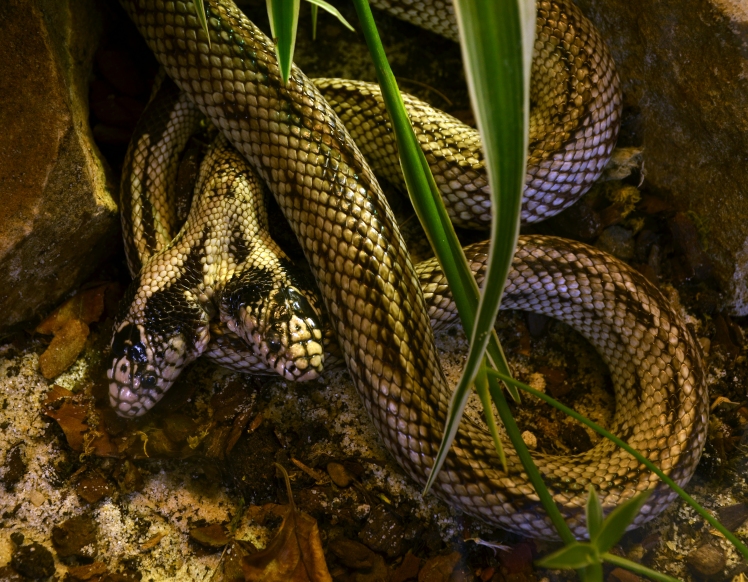 Originally published in February 2013 in issue two of The Alarmist, a wonderful yet sadly now-defunct British publication which largely inspired my founding of FLAPPERHOUSE. 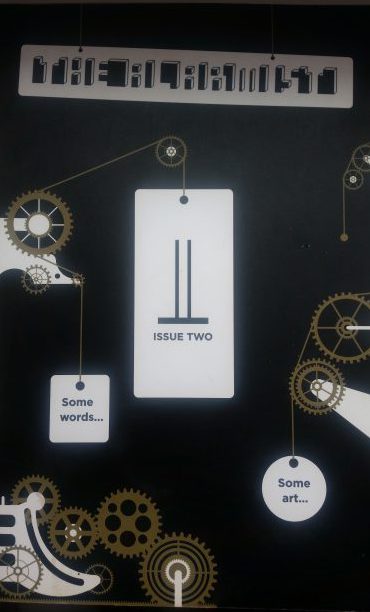 As to where exactly in the U.S.A. it originated, few people can agree.  Among the 200 or so living souls who have encountered The Siamese Python, there are approximately 112 different opinions on where it came from. Some folks say it emerged from the sewers of New York City.  Others claim it jumped right outta the Rio Grande.  A couple swear it couldn’t have taken its first slithers anywhere else but the bayous of New Orleans. One man, Gunther Flendricks of Tergen, Ohio, insists The Siamese Python hails from Tergen, Ohio.

One of The Siamese Python’s heads could kill you with its venomous bite. The venom lies dormant in the human bloodstream between 2 and 24 hours before initiating an excruciating death, which lasts about an hour but supposedly feels like 6 to 8 weeks.

The other head’s bite contains the one and only antidote to this venom. However, the antidote only works after one has already been infected. If you’re bitten by the antidote but aren’t bitten by the venom first, the antidote would be wasted.  If the venomous head bit you later on, nothing could save you.  No one knows the exact science of it all, but there’s definitely a science to it. 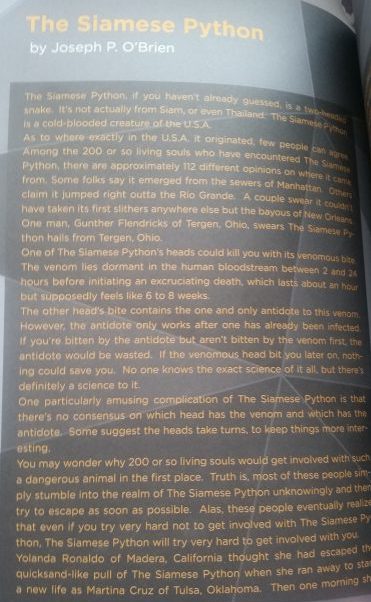 One particularly amusing complication of The Siamese Python is that there’s no consensus on which head has the venom and which has the antidote.  Some suggest the heads take turns, to keep things more interesting.

You may wonder why 200 or so living souls would get involved with such a dangerous animal in the first place. Truth is, most of these people simply stumble into the realm of The Siamese Python unknowingly and then try to escape as soon as possible.  Alas, these people eventually realize that even if you try very hard not to get involved with The Siamese Python, The Siamese Python will try very hard to get involved with you. Yolanda Ronaldo of Madera, California thought she had escaped the quicksand-like pull of The Siamese Python when she ran away to start a new life as Martina Cruz of Tulsa, Oklahoma.  Then one morning she was making coffee and found the python coiled in the Crock-Pot that was soaking in her kitchen sink.  Two hours later she called her brother-in-law from a pay phone near Carthage, Missouri, saying she’d call again once she got to Illinois, but that was the last anyone heard from her.

Some people do, in fact, purposely get involved with The Siamese Python, even after they understand the risks, because- so the legend goes- the python can grant you something more than mere death.  Rumor has it that if you’re bitten by the venomous head and then get cured by the antidote head, the antidote will also make you immune to any other toxin or malady known to humankind, including old age.  You could still die by violence, but essentially, you’d stand as close to immortality as anyone has ever stood.  Or so the legend goes. 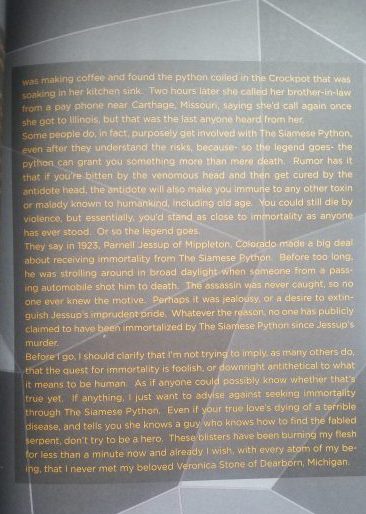 They say in 1923, Parnell Jessup of Mippleton, Colorado made a big deal about receiving immortality from The Siamese Python.  Before too long, he was strolling around in broad daylight when someone from a passing automobile shot him to death.  The assassin was never caught, so no one ever knew the motive.  Perhaps it was jealousy, or a desire to extinguish Jessup’s imprudent pride.  Whatever the reason, no one has publicly claimed to have been immortalized by The Siamese Python since Jessup’s murder.

Before I go, I should clarify that I’m not trying to imply, as many others do, that the quest for immortality is foolish, or downright antithetical to what it means to be human.  As if anyone could possibly know whether that’s true yet.  If anything, I just want to advise against seeking immortality through The Siamese Python.  Even if your true love’s dying of a terrible disease, and tells you she knows a guy who knows how to find the fabled serpent, don’t try to be a hero.  These blisters have been burning my flesh for less than a minute now and already I wish, with every atom of my being, that I never met my beloved Veronica Stone of Dearborn, Michigan.